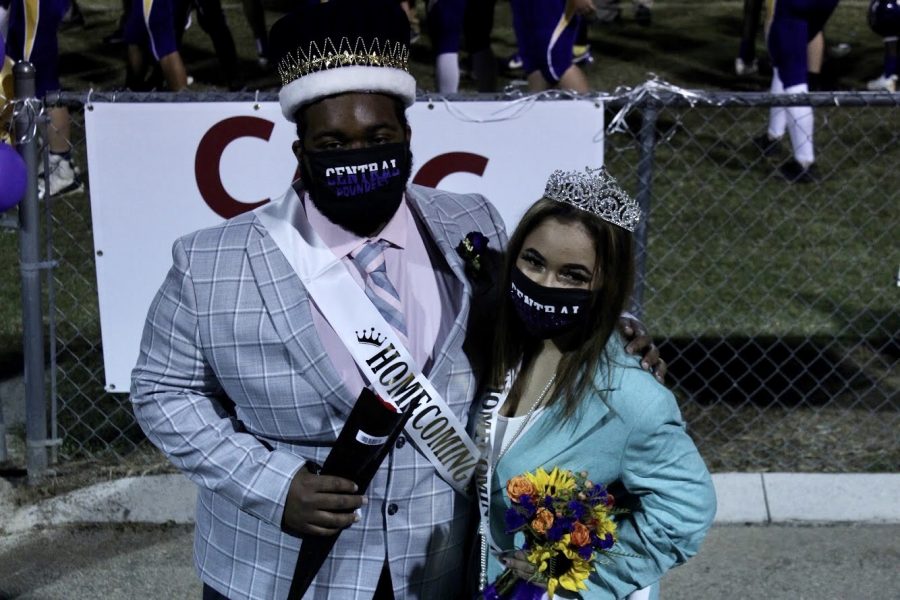 During these uncertain times, many students have relied on activities and traditions to keep themselves motivated at school. One of these exciting traditions is Central’s annual homecoming football game and court announcement. On Friday, October 2, Central played its long-awaited homecoming game against the Howard School. The game held many excitements for students, including the announcement of this year’s Homecoming King and Queen.

Ten seniors were nominated for homecoming court this year and, out of these ten, Seniors Kenyon McCrobey and Destiny Smith were awarded the honors of Homecoming King and Queen.

“I didn’t expect to win, I was very surprised when the announcer started to say my name,” McCrobey shared when asked if he expected to win. “When I did win I felt this wave of elation and nervousness. To myself I was thinking, ‘Are you guys sure?’ In the end, I’m honored to have been crowned.”

At halftime, the winners were announced after each of the nominees were presented while they walked the football field. After announcing each candidate, the nominees with the most student votes were revealed.

“It felt amazing to win… I was shocked that it even happened. At first I was very nervous so when they announced my name I just had a big smile on my face and was shaking nervously. Everything that I had been told to do after the winner was announced left my mind. I was just so excited that I won,” shared Smith.

Even though the current pandemic situation has caused many changes and interruptions throughout the school year so far, students were excited and proud that Central was still able to pull of the annual homecoming celebration. Using thorough voting and selection techniques, every senior was able to be included in voting for homecoming court this year. The staff at Central also did their best considering current safety regulations to allow the students to come out and enjoy a night of fun at the homecoming game.

Earning the title of Homecoming King and Queen is a high honor that only some of the most dedicated students are able to achieve. The winners of this year’s court are completely honored to have been selected to win and have assured students that they will maintain and honor their high rank as homecoming king and queen for the rest of their high school careers.