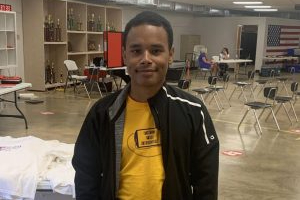 donated to the Digest

Erickson Frias-Cruz, a Junior at Central High School, has been awarded a scholarship for his performance on the debate team.

As the upcoming debate season approaches, Frias-Cruz could not be more excited. During the previous debate season, he received a scholarship for being the best speaker among the 4 teams which attended.  The Best Speaker award is given to a debater who excelled with confidence and consistency. After each debate, the judges would choose 1 student who gave the best presentation. Once the competition is over, they tally up the points and decide on who is the best. The award is $1500 given consecutively for 4 years, which sums up to the $6000 overall.

When asked what made it all possible, Frias-Cruz stated, “Jack and I were part of a team, and we were given only a single month to prepare for the competition. In the beginning we were a bit frantic, but Jack took charge and pushed us straight into planning. I have to say, if it weren’t for Jack’s determination, I wouldn’t have had the confidence to speak proud. When it was my turn to speak in the Finals, Jack could even see how much I was shaking under the camera. Jack’s motivation skills, paired with my planning, led to me winning the Best Speaker reward of $6,000.”

As of this moment, Frias-Cruz plans to attend Weber State University in Ogden, Utah. Weber’s debate team is ranked top 25 in the country. As of right now, he isn’t certain whether or not he will participate at Weber. Although it may be far from home, Frias-Cruz sees a bright future for himself there.

On top of taking part in the debate team, Frias-Cruz has been involved with the Marching band for 3 years, originally on Clarinet, but moving to Alto Sax for better sound support. He is also part of Central’s JROTC battalion, serving as Let III this year. Taking part in JROTC has done much more than help him to make an array of friends; it has helped teach him things that served well during his competitions such as teamwork skills and the ability to stay determined when given only a month to prepare.