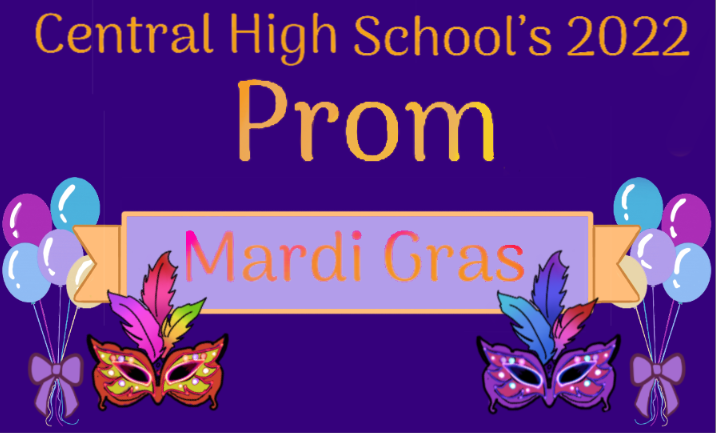 LIVELY MARDI GRAS PROM FOR CLASS OF 2022, 2023-- The theme of this year's prom has been confirmed as Mardi Gras! Come celebrate with fellow classmates to finish this year strong.

“It was a fun event to participate in with friends and partners.”

“A night to remember.”

“This is one that is always going to be in the books!”

These are statements made by fellow students that attended Central High School’s 2022 prom.

Like many school events, prom has been affected heavily by COVID-19. 2021’s prom followed CDC guidelines and was both an indoor and outdoor event. This encouraged attendees to socially distance themselves and have a safe celebration instead of being packed into one single room. The class of 2020’s prom was postponed indefinitely due to COVID-19. This year, prom has finally made it back to normal and Junior officers, along with Mrs. Tina Cotreau, worked harder than ever to make it a night to remember.

Despite those past years, Central was able to end the 2022 school year with a Mardi Gras-themed prom at the Ooltewah Commons. Couples followed the theme by wearing dresses and suits that resemble the colors incorporated in the Mardi Gras tradition.

“When tickets were first being sold, only one or two were being bought throughout the weeks. In fact, after the first four months, many were unsure if prom was even going to happen. The minimum of 80 tickets sold had not yet been reached and time was flying by quickly.” Mrs. Cotreau stated.

“We sold tickets for 4 months starting in January and then extended the date.” Mrs. Cotreau elaborated, “[After the extension] we ended up selling over 100 tickets.”

The tickets were $50 each for both Juniors and Seniors, but if you wanted to bring an underclassman or someone from another school, a special form had to be filled out in order to invite them.

The music played during the prom was played by the Dj, Tyler Guidry, an alumni student that put together a variety of songs to play throughout the night including the cha-cha slide, the electric slide, and much more.

Prom is also the time to announce the Prom King and Queen, those two lucky seniors were Madison Jenkins and Tongun Gore, one of Central’s most noticed couples. The two got the chance to slow dance together to the song “Perfect”, by Ed Sheeran.

Students were allowed the opportunity to take pictures as groups and couples at a photobooth station provided by “We R Photo Booth” company. They provided Mardi Gras-themed accessories such as hats, necklaces, and signs.

The prom was definitely an exciting event for the 2022 school year. Over 100 students attended the prom.