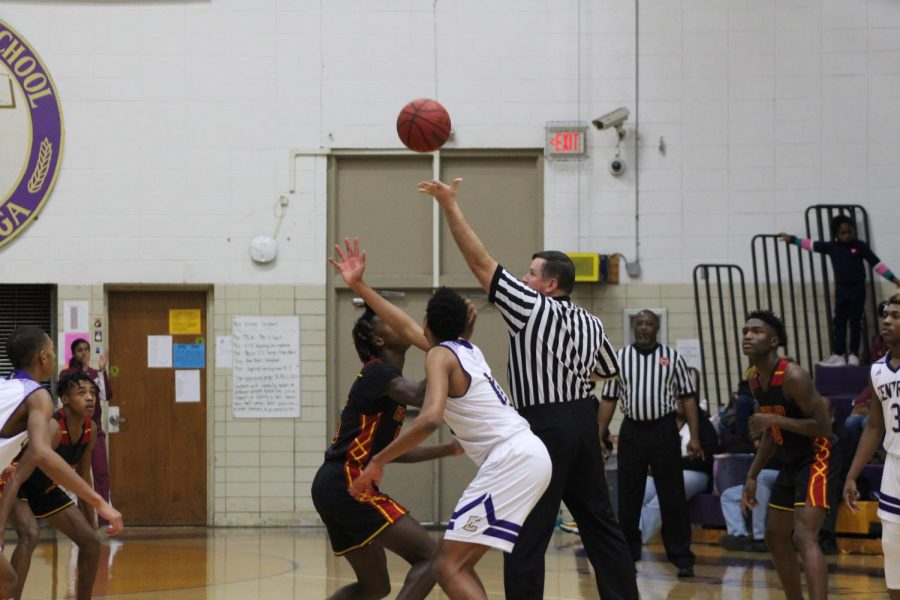 Throughout this season, the Pounders have began to play tougher teams. Confidence as a team has wavered from time to time, but, as the season progresses, the team continues to search for consistency. As soon as that begins to click in the players’ mindset, the team will begin to fully prosper.

The boys varsity basketball season began on November 26, 2019. The Pounders played East Ridge at Chattanooga Central High School. Throughout the game, the boys played very well defensively. They were beginning to click on all cylinders, mending together more as a team rather than individuals. Isaiah Hayes dominated the game, leading the team with 17 points. Going into the game, the team was confident and played hard. In the end, the Pounders came out on top, winning 57 to 27.

Senior Isaiah Hayes stated, “We are improving by keeping the same intensity and having the drive to want to win. We continue to fight no matter what [by] playing our best at 100 percent.”

The following Tuesday, the Pounders went in ready to play the Hixson Wildcats. During this game, the team shot the ball well, shooting and scoring 12 to 15 free throws. The energy throughout this game was infectious. The players were attentive and looking to seek improvement; they were just bouncing around, ready to play. The hard work that the players had put in paid off, and they ended up winning the game 66 to 53.

That same week, on Thursday, December 5, the Pounders were lined up to play Red Bank High School. The boys had previously came off of three wins. The boy’s came into the game eager and ready to play. However, the Pounders fell short by a mere 12 points, ending the game 68 to 56.

The next Monday, the Pounders were ready to play Tyner Academy. In the previous game, the Pounders had a tough loss; it was their first loss of the season. As a team, the boys had played fairly, although the ball was not well taken care of. Therefore, there was approximately 27 turnovers. Valuing possession of the ball would have been a huge game changer. The score ended with Tyner winning 51 to 38.

In game five, Central went to Howard to play on their court. Going into the game, there was no confidence, as the team had fallen short the previous two games. On the first possession by the Pounders, the team had an unforced turnover, losing the ball upon the first possession. Throughout the game, there were many turnovers on offensive rebounds. In this game senior, Senior Tavarus Grayson, shot the ball very well. Having an astounding four for five three pointers and five for six shots from the field.

Coach Kantonio Davis stated, “If we can find out how to not turn the ball over and remain possession, we will have a great season!”

The next week, on that Thursday, the team was prepared to play Boyd Buchanan. The Pounders consistently fought hard, but, overall, lost the game. The team lost by five points, with the final score being 49 to 54.

After that, the team practiced relentlessly, fighting hard to be ready to play after winter break finished. As soon as the team returned to school, they played on that Tuesday against Signal Mountain. Throughout the game, there was an infectious energy of determination. After fighting hard for four quarters, Central High came out on top winning 69 to 41.

The following Friday, the Pounders played Brainerd High School on their own court. Both teams fought back and forth on the scoreboard, keeping everyone on their toes, ready for that next play. Unfortunately, Central lost 56 to 62.

The latest game was Monday, January 13, where the Central Pounders played the Tyner Rams at Chattanooga Central High School. As a team, the Pounders came into the game strong, but slowly fell, becoming the second best playing on the court. Even though they left everything they had on the court, the team finished the game with 40 points; Tyner had earned 61.

“As we progress throughout the season, we plan on being in the gym daily and working hard. Each game, there are different approaches, and we have to do our part by making sure that we are prepared. We also have to make there the kids don’t get complacent and are continuing to strive to always get better,” stated Coach Davis.

Tuesday, January 14, the Pounders continued to fight hard as they faced East Ridge High School. They fought hard through the game, ending the game 61 to 55. Later that week, they played Howard High School. The game was fought very defensively back and forth, although Central allowed Howard to take the lead in the very beginning. This left a gap between the two teams’ scores. In the end, the tigers fought through and won with 59 points to Central’s 48.

As of now, their overall record is 4 to 10, while their district record is 3 to 5. Readers can view the latest sports updates on the sports center page. This is where schedules, scores, and rosters will be posted.