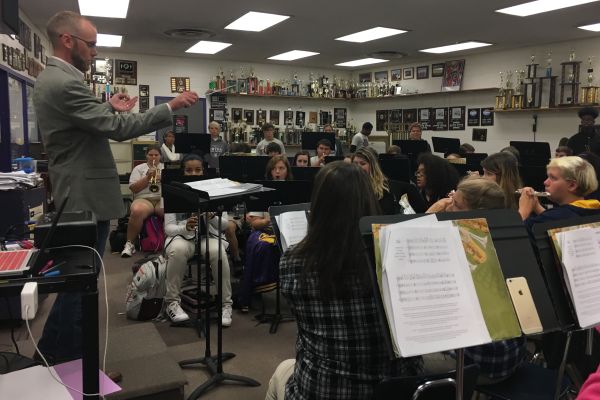 JOSHUA BLOODWORTH IS NAMED THE TENNESSEE EDUCATOR OF THE MONTH FOR OCTOBER — The Central Band Director, Joshua Bloodworth instructs the Central Sound.

After being named Educator of the Week for Central High School earlier this October,  Mr. Joshua Bloodworth, the Central Band Director, was awarded the statewide title of Tennessee Educator of the Month for October.

“I am completely blown away by being Teacher of the Week in Chattanooga and Educator of the Month for the state!” exclaimed Mr. Joshua Bloodworth.

To be selected as Educator of the Month, teachers must first be nominated by a student and selected as Teacher of the Week for the different regions of Tennessee by the various different news stations. Then, all of the participants’ pictures are placed on the Tennessee Lottery’s Education website to be voted on for Educator of the Month from people across the state. Mr. Bloodworth was a part of a pool of approximately 16 teachers.

“Educator of the Month includes recognition on the Tennessee Lottery’s Education website. News Channel 9 also presented me with a certificate and gift cards to Firebirds this past Monday during band class. News Channel 9 featured me when I was Teacher of the Week and is supposed to be including coverage on Educator of the Month this week and next week, I believe,” elucidated Mr. Bloodworth.

Despite having competition from 16 other teachers, Mr. Bloodworth’s efforts seem to have moved his students to vote much more than the other 16 nominees, all of whom are equally magnificent educators, from around Tennessee.

“The main reason that I was excited about both the teacher of the Week and Educator of the Month recognition was that it all started with a current student nominating me. Then students and others in the community then went online and voted for me. It’s really special that folks thought enough of me to take time out of their day to cast votes,” stated Bloodworth modestly.

“In a day and time when most publicity about education is related to the negative things going on in our schools, it was really unique and special to have recognition of something that others believed was being done correctly here in the Band Room at Central High School. Again, what makes this special to me is that the students and community cared enough about me and believed in what I am trying to accomplish to recognize me in this fashion,” commented Bloodworth.

Not only has Bloodworth’s efforts to refine the students’ skills shown in their music, but it has also moved their hearts.

“I feel like he is a very great educator, and really knows what is best for us as students. It is wonderful that He is the Educator of the Month because he really deserves it,” shared sophomore band member Samantha Townsend. “He always finds a way to joke around in class, but also keeps us focused when necessary. He really does care for us  and wants us to have a great musical experience!”

As commendable of an educator that Mr. Bloodworth has proven to be, the question still rises as to what exactly an ideal teacher is like.

“I believe that an ideal teacher must have deep content knowledge about the subject, have a passion for teaching, and mist also know how to build relations with students,” construed Mr. Finley King, the principal of Central High School. “Band compliments him, the students know that he is a tough teacher, but are also aware that he is doing so to refine their skills. People know of his hard work and once he was chosen as the Teacher of the Week, people realized that they could vote for him, and were really happy to be able to help others recognize his efforts.”

Although a number of the Central staff have been recognized as the Teacher of the Week for the county, Mr. Bloodworth is the first teacher from Central High School to be recognized as the educator that represents the whole state of Tennessee.

“I am proud of him. This only reinforces the decision of bringing Joshua to Central,” comments Mr. King.

Mr. Bloodworth’s achievement of Educator of the Month was truly a tour de force. He has captured the respect of his students, his school, and now the state of Tennessee.

“I’ve gotten more than enough recognition to last me for a very long time in the past few weeks. I’d rather the publicity go to my students and their accomplishments as they are my real trophies,” contently concluded Bloodworth.