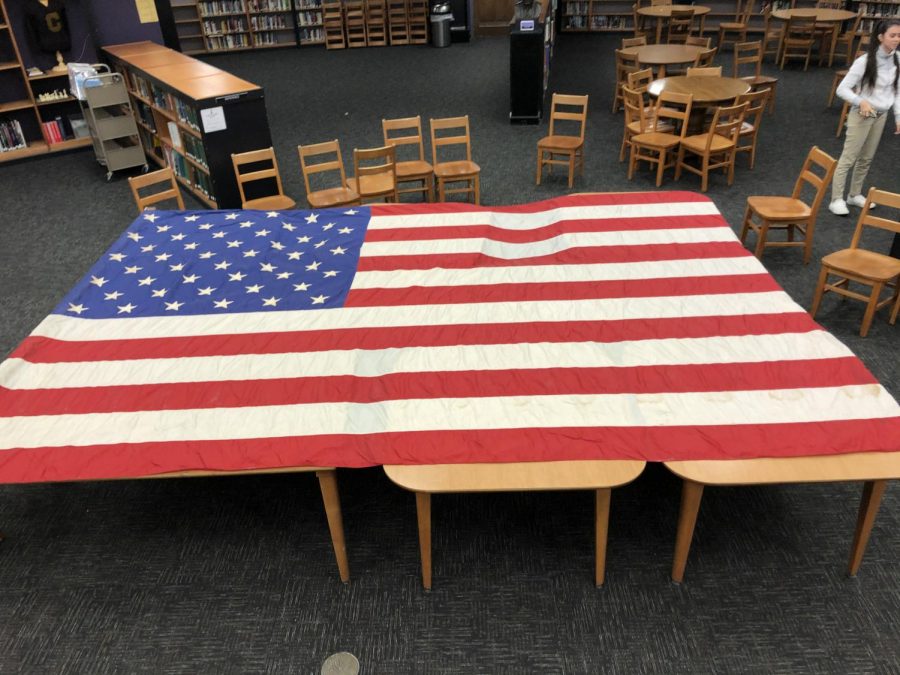 “I pledge allegiance to the flag, of the United Sates of America.”  Students say these words every morning before they begin their day at school, but do they know the significance of those words and what they mean to Central High School?

In the fall semester of 2018, Wellness Teacher and Baseball Coach, Franklin Carter uncovered a large flag, among a plethora of math books, in a storage closet beside the gym while preparing it to be the Athletic Trainer’s office.  Carter then gave it to Central’s Librarian, Melinda Martin, for proper storage and to discover its history.

The first step in looking at the flag was to count the stars to understand when the school would have purchased the flag.  This is due to the addition of Hawaii and Alaska to the Unites States of America in 1959.  When it was discovered that the flag contained all 50 stars, it was confirmed that the flag was purchased after 1960.

After looking through Champions (Central High School’s yearbook) and Central Digests from the years following 1960 it was discovered that the 10’x15′ flag was purchased around the time that the prestigious Bellamy Award was given to Central (1963).

“Central High School receives high and justified honor this week with the presentation to it of the coveted, national Bellamy Flag award,” stated a Chattanooga newspaper the week of the awards ceremony.

The Bellamy Award was a national award given by the Bellamy family. They did this in honor of Francis Bellamy, who penned the original draft of the Pledge of Allegiance.  Schools who were awarded with this honor exhibited the spirit of the American flag: patriotism, citizenship, service, and other specific qualities.

Central High School received this honor in the fall of 1963 and is the only school in Tennessee that has received the honor.   The ceremony to receive the Bellamy award took three days, and drew many guests from around the country.  Among the 2000 honored guests were 20 students from schools who had previously received the award, the Bellamy Award Board, the Tennessee Governor, and many others.  To commemorate the event, the school received another flag: a flag that once hung above our nation’s capitol.  The Bellamy award was one of the biggest honors that Central has received.

“Being this large, it draws attention to the Bellamy program,” stated Buffy Hoge, President of the Central High School Alumni Association, as she explained the significance of the sizable flag.

After the ceremonies in the auditorium the eye catching flag hung in the gym at the Dodds Avenue location until Central moved to Highway 58 in 1969, and it may have hung at the new location.  However, the flag is not clearly pictured after the school moved locations.  Currently, the 10’x15′ flag is the largest flag the school has ever had, and has ties to a significant part of Central High School history.  It is here as a memorial and reminder of the Bellamy award and as a representation of Central values that earned it such an honor: patriotism, citizenship, community involvement, quality education, and honor.

“We would like to put it in a plexiglass frame and display it….I think it would be great if it would be preserved and hung in the gym,” suggested Hoge.