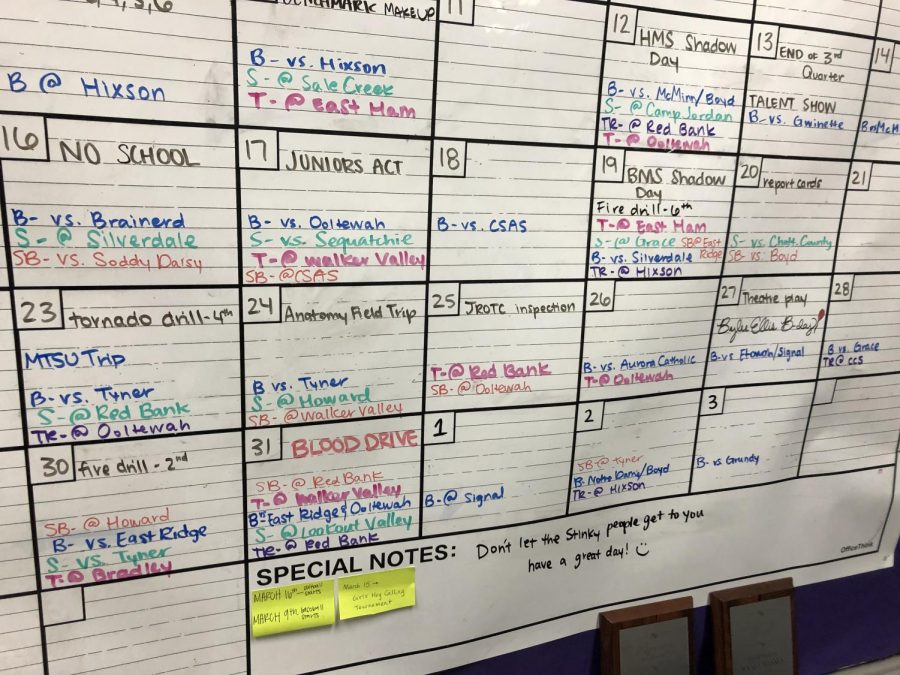 HAMILTON COUNTY’S SHUTDOWN DUE TO COVID-19 BRINGS POSTPONEMENTS AND CANCELLATIONS — A schedule of March, showing all the events that are being postponed or cancelled.

Hamilton County recently joined the thousands of school districts across the world temporarily shutting down campuses due to COVID-19 fears. The virus, which started its reign in November of last year, has spread to all continents besides Antarctica, infecting hundreds of thousands. Because of the virus’s startling speed of spread, Hamilton County officials decided to shut down schools for two weeks to combat the infection; a case of the virus has recently been confirmed in the area, and county officials do not want the virus making its way through schools.

March is one of the school year’s busiest months and roughly half of it has just been cut out. These events are either being met with cancellations or postponements, as no school events can be held over the next two weeks. This includes spring sporting games and practices that have been cancelled until March 30 and will resume after students are back in school.

According to 10 and 11 grade Guidance Counselor Chelsea Thornhill, the original nationwide ACT testing date for juniors has been moved from March 17 to April 21. The ACT will still be taken at school and will be free to all juniors.

The eighth grade visit for Brown Middle School students was originally scheduled for March 19, but it has been postponed. At the moment, ninth grade Counselor Karen Atkins does not know the new exact date of the visit, as she has to accommodate with the middle school schedule, but she is working very hard to make sure it can happen before the end of the school year.

Report cards for the third quarter will continue to be sent out on Friday, March 20. This date has not been changed, as the report cards are going to be sent online. All grades were put in this week and report cards should be ready by the set date.

College Adviser Stacy Alexander had a college trip planned for select juniors on March 23. Students were going to visit the campus of Middle Tennessee State University (MTSU). This field trip is cancelled until further notice, but Ms. Alexander hopes to reschedule it as soon as possible.

AP Biology, AP Chemistry, and anatomy students were planned to attend a field trip to the Bodies Exhibit in Atlanta, Georgia on March 24. According to Biology and anatomy Teacher Tina Cotreau, she will be in talks with Principal Phil Iannarone to reschedule the trip.

“I’m hopeful that a reschedule will work and we don’t have to cancel. I don’t want the student to miss out on it,” said Cotreau.

JROTC was scheduled to hold their formal inspection on March 25; this is going to be rescheduled and modified. The new date of the inspection is not decided yet, but JROTC instructors are aiming for it to be held in early April. Cadets will know the date by the time schools resume. Colonel Brooks, who is head of the Hamilton County JROTC department, will not attend Central’s inspection as he normally does. The inspection will be less formal than it usually is, so the class can better compensate for lost time.

Theatre II students and Teacher Ms. Kelsay Cate were originally going to hold their play “Oz” on Friday, March 27. The play will be rescheduled, but Cate does not know the exact date.

“I’m not sure when the play will be yet. I’m hoping we’ll be able to reschedule. We’re hoping to still have the performance- just at a later date. We just received a donation from DonorsChoose of wireless microphones and we were funded by Walt Disney company in New York. Hopefully, we’ll be able to use the microphones and continue to get ready for the tentative new date,” shared Cate.

Central’s choir had planned a field trip to Dollywood for March 28. Dollywood has allowed them to postpone the trip to a later date at the same price. Choir Instructor Katheron Latham does not have a specific date planned yet, but she is looking to hold the trip sometime in May.

According to Principal Iannarone, end of course (EOC) testing dates are not being changed at the moment. EOC test dates are decided by the state’s education department, the department judges state that schools are still on track to meet the test dates. These test dates will only be moved if the county-wide shutdown is increased past the original two weeks.

For further updates, visit the Hamilton County Department of Education website, where county officials will be continuously posting updates. If you have any specific questions, you can find the contact information for all Central faculty here.