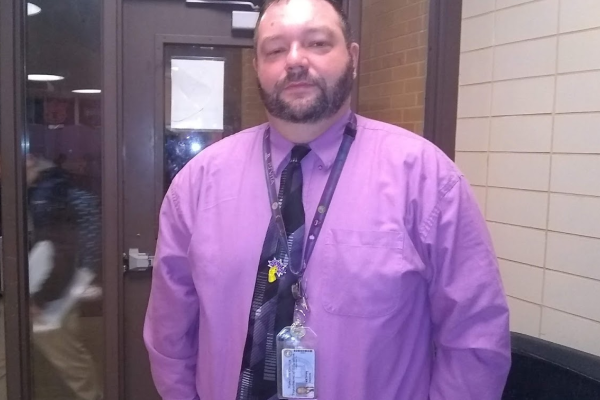 TEACHER SPOTLIGHT: NEW PHYSICS TEACHER, NATHAN DAWSON, ENCOURAGES HIS STUDENTS TO BE SUCCESSFUL — Nathan Dawson plans to impact the lives of students by teaching them well and encouraging them to do good things in the future.

Central High School opens its doors to new staff members each year due to the retirement of many teachers. This year, the school has welcomed new Physical World Concepts teacher, Nathan Dawson.

“So far I enjoy Central a lot; I enjoy teaching using different methods with a twist. I especially like how the students listen to my instructions,” divulged Dawson.

He may be a new teacher, but he has already become a school favorite due to his personality and teaching methods.

“I think that he is a very genuine teacher. I believe that he wants to understand every student and their requirements to help them learn,” stated freshman, Carys Oppsdisano.

Before he was a teacher, Dawson worked as a manager at a restaurant where he met his wife, who inspired him to pursue a teaching career. His hobbies now include spending time with his daughter, going to the amusement parks, and watching sports.

“I was motivated to become a teacher because of my wife and my five year old daughter,” explained Dawson.

In high school, he was known as a trouble maker, but also as an intelligent student who tried his best to do the work. It payed off because he later attended three colleges including The University of Tennessee in Chattanooga, Chattanooga State Community College, and Western Governors University.

Before coming to Central, Dawson taught in Georgia, so getting used to a new environment might have been difficult; however, the staff at Central welcomed him with open arms. He has definitely gotten along with the staff he has met in the first couple of months at Central.

Dawson hopes that the students he teaches can use what he taught them in real world situations. He also hopes that his students can use these things in college or in whatever college majors they take. He will continue to encourage his students to be successful in school and in the future.