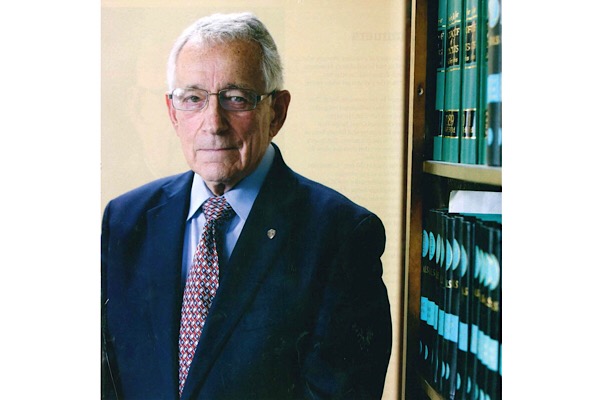 JERRY SUMMERS (CLASS OF '59) REFLECTS ON TIME AT CENTRAL BEFORE HIS 53 YEAR LONG CAREER AS A LAWYER -- Jerry Summers recalls fond memories of Central before he attended university and became a successful lawyer. (Erin O. Smith, Times Free Press)

JERRY SUMMERS (CLASS OF '59) REFLECTS ON TIME AT CENTRAL BEFORE HIS 53 YEAR LONG CAREER AS A LAWYER -- Jerry Summers recalls fond memories of Central before he attended university and became a successful lawyer.

Most everyone attributes their high school years as a time of transformative growth and self discovery. Over all the years that Central has been around, a multitude of students have went on to become successful, active members of members of society. That is no different for alumnus Jerry Summers.

“Central did not steer me to be a lawyer, but the academic background prepared me to make it through college and law school,” said Summers.

With English and history being his favorite subjects, Summers was an active student at the school. He played football, basketball, and baseball while also being a member of the C Club and National Honor Society. He was even voted Most Athletic during the annual Senior Superlatives distinction.

Among his favorite teachers are Bobbie Ruth Hodges, Arlie Hoodenpyl, and Stanley Farmer.

Along with his expertise as a lawyer, Summers has a gift for writing as well. He has written two books about his time at Central that detail the accomplishments of its students and teachers.

“I have written a book on Coach Farmer’s life, titled We Called Him Coach. It is available for purchase through the Alumni Association and my office with a donation to the Community Foundation of Greater Chattanooga [CFGC] to support that scholarship. There is also another book I have written on the 1958 Central State Runner-up basketball team titled One Shot Short which is also available for purchase with a similar donation to [CFGC],” revealed Summers.

Having graduated Central with the Class of 1959, Summers went on to attend Auburn University later that very year on a baseball scholarship. From 1960 to 1963, he went to The University of the South to major in economics. After that, he enrolled into the University of Tennessee College of law, completing his certification to be a lawyer in 1966 by earning his Bachelor of Laws degree.

Some of Summers’s favorite aspects of being a lawyer have to do with the feeling of satisfaction that comes from doing the right thing and helping defend others, giving them the justice they deserve.

“[I really enjoy] helping people that need legal assistance. The practice of law has been very good to me,” said Summers.

A few of the assets that students interested in law might want to consider are being proficient in typing and computer knowledge as well as being knowledgeable of English, political science, and history.

While Central Alumni, such as Summers himself, have proved that the school is rich with talented students that can make a difference in the world, it is ultimately up to the current students to maintain that high standard.

“What I hope to see from Central in the future is continued academic excellence and improved athletic programs,” concluded Summers.

Edge Magazine, in association with the Times Free Press, published a news feature about Summers in their June edition. To find out more about Summers’s experience as an attorney in their article, click here.