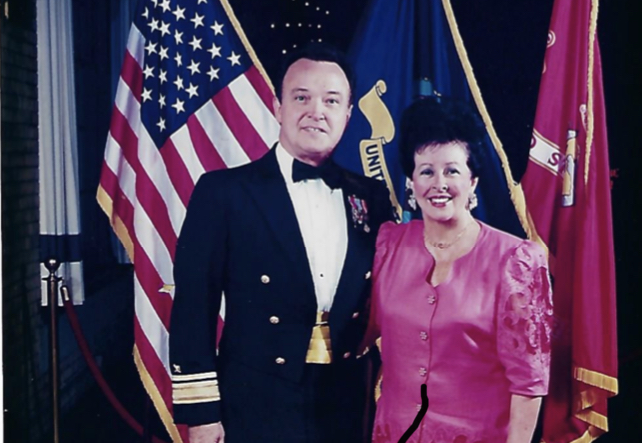 VANCE AND CHARLYNNE FRY (’54) LEAVE A LASTING LEGACY OF SERVICE AT CENTRAL HIGH SCHOOL — Admiral Fry stands with his wife, Charlynne. (Donated to the Central Digest)

Central High School is blessed to have many alumni who continue to support students in various ways. Alumni Admiral Vance Fry and Charlynne Harris Fry were very involved students at Central, and they continue to find ways to be involved in their community and former high school.

Charlynne and Vance Fry might have been in every club or organization in some way at Central. A few of Mrs. Fry’s extracurricular activities included being president of the Girl’s Tri-Hi-Y, secretary of the senate, vice president of the Spinsterettes Social Club, vice president of the Glee Club, member of the band and orchestra, feature editor of Central’s yearbook, the Champion, and even business manager of the student newspaper, the Central Digest.  It can be hard to summarize one’s high school experience, but one can measure the effect it had on their character and life skills.

“My experiences in high school enriched my life far beyond what I realized at the time. I learned skills of leadership, the awareness of psychology of being around all types of people, the importance of maintaining, hopefully, [the] best of character traits for a positive influence, the pure and simple joy of wonderful friendships, and learning that I wanted to be a music educator and preparing for what God had in store for me,” explained Mrs. Fry.

Admiral Fry’s list of extracurricular activities is just as lengthy. He was president of the Key Club, head Cheer Leader, member of the Announcers Club, Photography Club, Disc and Diamond Society, National Honor Society, as well as the sophomore, junior, and senior class president.

“I learned to be diligent and focused on the goals which needed to be accomplished,” expressed Admiral Vance Fry.

Admiral and Mrs. Fry graduated in 1954. Throughout all of their high school careers, a few things still stick out to them today. For Mrs. Fry, it was being named Torchbearer and Miss Central during her senior year, and realizing her favorite subjects (English and music) were areas she wanted to make her career.

For Admiral Fry, some of his favorite memories of being at Central include being named Mr. Central during his senior year, or enjoying his favorite subjects: science and math. Even though their memories are different and unique, they both agree that their favorite thing that happened to them at Central was meeting one another their sophomore year. They were married on June 18, 1960.

After high school, Admiral and Mrs. Fry went different ways, career-wise, as they went off to college. Mrs. Fry went to Bob Jones University in South Carolina receiving a Bachelor of Science in music education and a minor in English, while Mr. Fry went to Tennessee Tech University for one year before going to the Naval Academy where he received a Bachelor of Science in Marine engineering.

After their education, Admiral Fry served in the Navy for 39 years and Mrs. Fry began her job teaching music and English at the new Lookout Valley Junior High School. Similarly to Central, she was extremely involved in her school, striving to make it better.  In addition to that, she went home in the afternoon to teach piano and voice privately.  Mrs. Fry is a National Certified Teacher of Music and has been recognized for 50 years of teaching, and was named Music Teacher of the Year twice by the Chattanooga Music Teachers Association.

“I began the choral department, the instrumental department, including conducting Summer Band Camps, taught general music to all 300 students once a week, was Faculty Representative, Cheer Leading Sponsor, directed the concerts and dramatic plays, supervised the parade activities, including constructing floats for the Chattanooga parade, and I wrote the school Alma Mater,” stated Mrs. Fry, explaining her involvement at Lookout Valley Jr. High School.

Admiral Fry has received numerous Naval awards, and he continues to speak for special occasions such as memorial services and Veterans Day programs. Admiral Fry also attended the University of Tennessee for Law and and received his Doctorate of Jurisprudence.  He began practicing law, and currently provides law services for Christian charities, where he has been recognized by the Tennessee Bar Association as the Pro Bono Lawyer of the Year for providing law services to the poor.

In 1995, he was recognized as a Distinguished Alumni of Central High School. Admiral Fry also serves as a deacon at Ridgedale Baptist, and has served on numerous mission trips. Currently, Admiral Fry is an Advisory Board Member of the Medal of Honor Heritage Center, and he is the Co-Chair of the Steering Committee for the Soldiers and Sailors Memorial Auditorium in Chattanooga with Mrs. Fry.

“I am very blessed to have graduated many, many fine, wonderful, award winning students in music who are making a difference all over the world,” expressed Mrs. Fry.

“We have learned together to have a giving spirit and have chosen to place in our lives God first, family [next], others, then ourselves,” concluded Admiral Fry.