The Lady Pounders Come Out on Top Against Lookout Valley 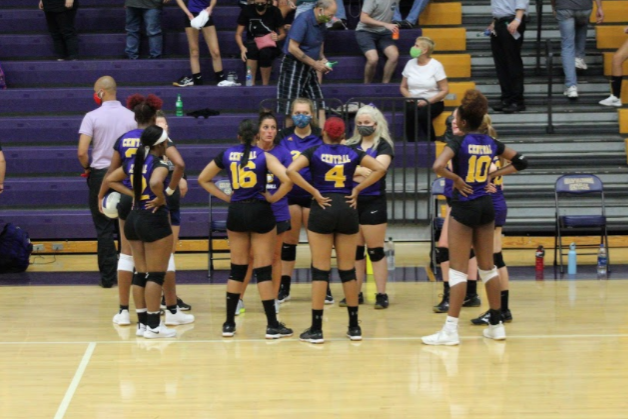 THE LADY POUNDERS VOLLEYBALL TEAM COMES OUT ON TOP AGAINST LOOKOUT VALLEY — Coach Ware discussing strategy with team during timeout.

The determined Lady Pounders team faced off against Red Bank, Lookout Valley, and Hixson in their third week of regular season play.

Central kicked off the week at home on Monday, August 31, against the Red Bank Lady Lions. The ladies competed hard throughout the first set, but they were overcome by a score of 25-19. The Lady Pounders played a solid second set. The score was back and forth the entire time. In the end, the Lady Lions prevailed 25-23.

Although the Lady Pounders lost, they played a game that kept spectators on the edge of their seats the entire time. Their improvements promise a great rest of the season.

“We have really improved on our passing and communication,” Senior Carmen Crabtree shared. “The entire team has worked hard in practice and it is showing in our games.”

“We played together like a team. Everyone contributed to make the win happen.” shared Coach Holly Ware.