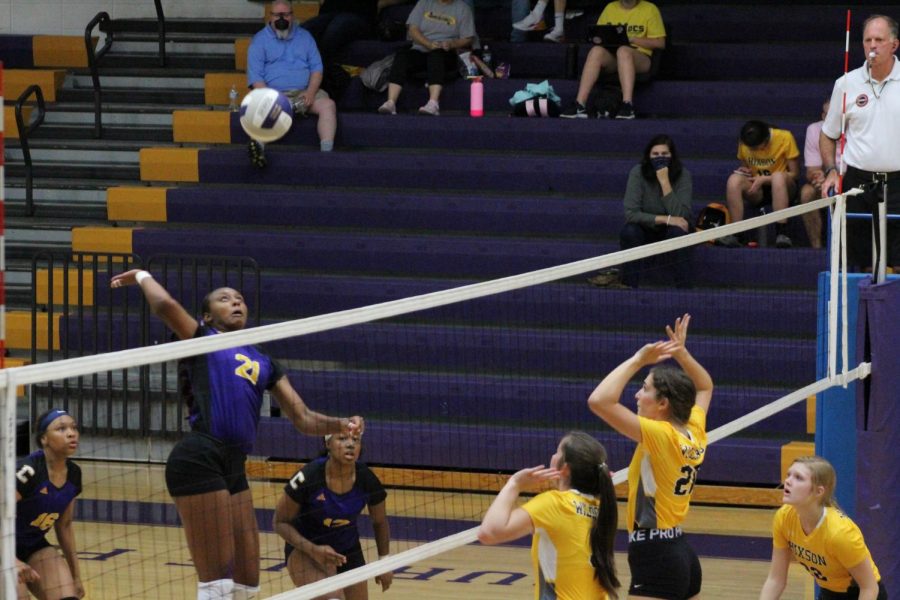 With only five regular season games remaining, the Lady Pounders hoped to improve their district standing throughout this week’s games. The ladies faced off against the Chattanooga School for the Arts and Sciences Patriots, McMinn Central Chargerettes, and Hixson Wildcats.

On Monday, September 21, Central looked to get even with the CSAS Patriots, who defeated them earlier in the season. The CSAS team has three eighth graders and three upperclassmen, but that has not stopped them from finding a way to win. The first set was back and forth, but near the end, CSAS rallied and came out with the set win, 25-18. In the second set, the Lady Pounders fought hard, but once again, the Patriots rallied- which produced another set win, 25-17.

The following night, the Lady Pounders hosted fellow Region three opponent, the McMinn Central Chargerettes.  Central quickly found their groove and shut down the Chargerettes’ attacks, defeating McMinn Central 25-14 in the first set. In the next set, the Lady Pounders executed well, resulting in a 25-10 win. Throughout the set, the trio of Seniors, TaNiya Crowder, Kamren Hammonds, and Carmen Crabtree, could not be stopped. Setter Carmen Crabtree’s consistency paved the way for both Crowder and Hammonds to blister the defense with powerful spikes. Up 2-0 in the match, Central continued their domination of the Chargerettes. Central completed the sweep of McMinn Central in the final set, with a score of 25 to the Chargerettes’ 19.

Tuesday’s match was a showcase of how the team has improved in playing cohesively. The Lady Pounders obtained the lead and maintained it the entire night.

“The team is learning how to make the hustle plays each game,” shared Coach Holly Ware. “They have learned how to play better as a team and how not to allow one mistake to effect the rest of the game.”

On Thursday, September 24, Central squared off with their district rival, the Hixson Lady Wildcats. Hixson quickly got off to a 3-1 lead, but a block by Junior Alona Allen helped the Lady Pounders get on track. The first set was back and forth the entire time.  The set was tied at 17 when TaNiya Crowder made an excellent serve, which gave Central a one point advantage. Great hustle from Junior Addy Wellington and solid team communication put the pressure on the Lady Wildcats. Hixson gained momentum, but Central battled back to knot up the game at 22. Hixson took back control of the game and won the first set 25-23. In the second set, Hixson got off to another hot start. After being tied 4-4, both teams rallied and were tied at 19. Hixson held on to the lead and won the second set by a score of 26-24. Hixson added on to their momentum from the first two sets and defeated the Lady Pounders in the last set, 25-20.

When asked about the game against Hixson, Carmen Crabtree said, “Even though we lost, I think the game helped us a lot. It showed us what we need to work on and I know the entire team will work hard to finish out the season strong.”

The Lady Pounders (5-11) will close out the 2020 season with two home games. On Monday, September 28, the Lady Pounders will battle the Lookout Valley Yellowjackets. Tuesday, September 29, will be the Lady Pounders’ Senior Night, where Central will play against the Chattanooga Patriots, who defeated them earlier in the season. The ladies will take the remainder of the week to prepare for their upcoming playoff games. Come out and support the purple and gold this week.

Readers can view the latest sports updates on the sports center page. This is where schedules, scores, and rosters are posted.