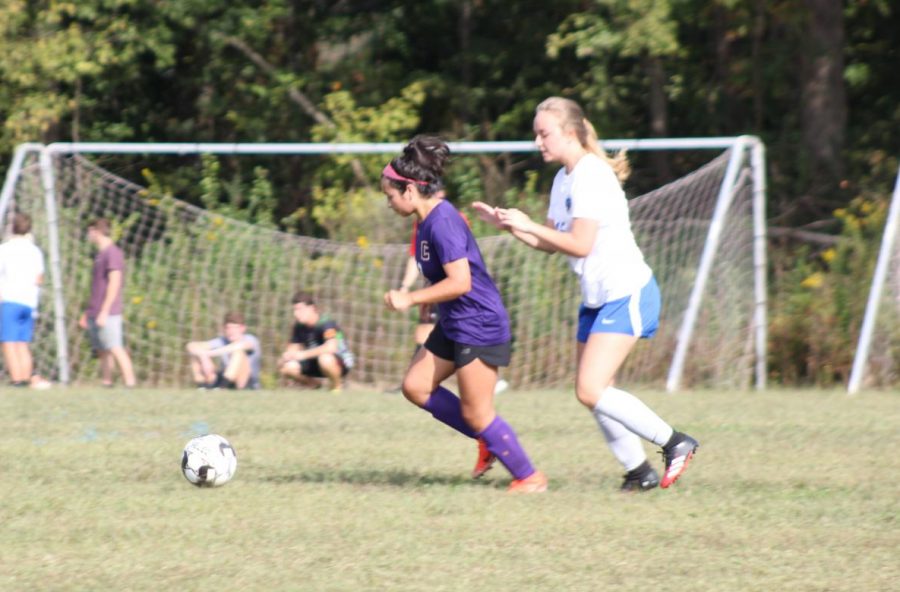 CENTRAL SOCCER COMES TO AN END- Junior Janetth Colunga dribbles towards the goal in an effort to keep the McMinn Cherokees from scoring.

This soccer season has come to a end for the Lady Pounders. The girls’ soccer team ended the season by playing Red Bank, McMinn, and Sale Creek High School the week before fall break. These games were tough for the Pounders due to having two players out with injuries. Central was forced to continue to play eight versus eight. The girls pushed through and finished the season strong.

On Monday, October 5, the team played against Red Bank at Red Bank High School. Central took a loss against the Lions. Even without substitutions, the Pounders played their best and persevered throughout the game. During the first half of the game, the Lady Pounders played well. The girls’ worked hard and played to the best of their abilities. Central scored one goal during the first half of the game, bringing the score to 2-1 at that time. In the second half, the players started to become tired due to having no substitutions. Sequentially, Red Bank scored two more goals, and the game ended with a score of 4-1.

“We played well and hung in there for most of the game, but in the end, we were tired and gave up on some late goals,” stated Coach John Brittingham.

“The last three games were something different. They were all special to me, even if we didn’t win every game. I feel like we all started clicking on the field towards the end,” shared Freshman Natali Dominguez.

On Thursday, October 6, the girls played McMinn at Central High School. During the first half of the game, the Lady Pounders were able to score one goal. Central looked to come back stronger after the half. However, the continued lack of substitutions caused the same downfall for the Lady Pounders. Central was not able to keep up with McMinn, and the game ended with Central losing, 7-1.

“We lost to McMinn 7-1 and did not play particularly well against a pretty good team,” stated Brittingham.

The girls’ tried to come back stronger from their game with Red Bank. They continued to give the game their all but fell short. Despite the loss, the Lady Pounders kept their heads up and focused on the last game of their season.

“In the beginning we were all trying to find our rhythm and get used to how each other played. Eventually we came together as a team and made it work,” shared Dominguez.

Lastly, on Friday, October 8, the Lady Pounders played Sale Creek at Central High School. During the first half, the team was playing well and scored two goals. At the half, the score was tied at two. During half time, the girls prepared themselves to push through. Unfortunately, Sale Creek came back and scored two more goals, beating Central 4-2.

“Had we played to our capabilities we should have won, but we had a few moments where we lost focus and Sale Creek made us pay,” stated Brittingham.

“I feel great about next season. We have a strong, talented core group of players. What we do need is more girls to come out and play soccer. I think the players we had this year will all tell you that they had fun, learned a lot and improved as players,” shared Coach Brittingham.