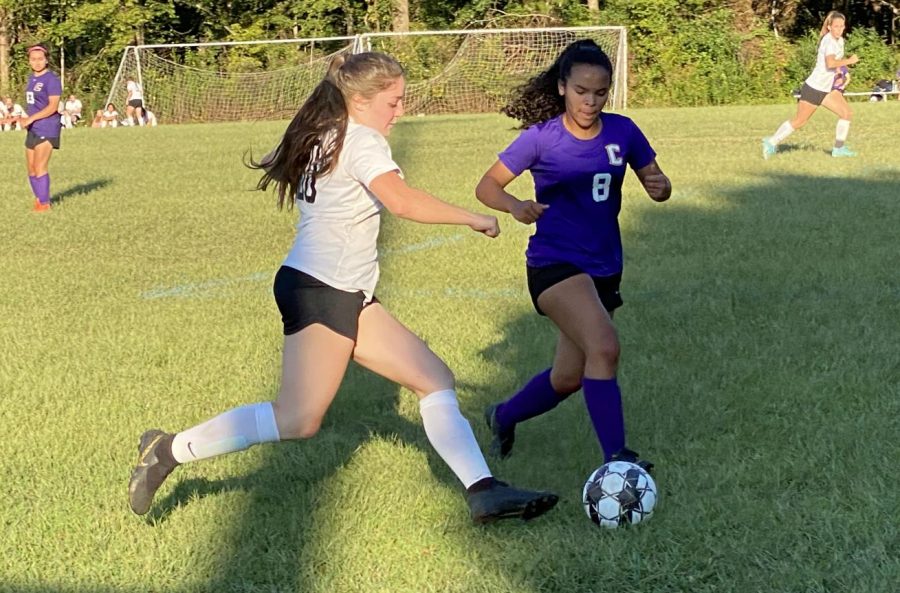 CENTRAL LOSES AGAINST BRADLEY CENTRAL AND EAST HAMILTON DESPITE EFFORTS — Freshman Cholee Cannon runs back down the field to stop the Bradley Central Bearettes from scoring.

With soccer season still among us, the girls’ soccer team played both Bradley Central and East Hamilton last week. Going into the first game, the Pounders sustained two injuries. With only playing with ten players originally, this knocked the team down to eight. This meant that each coach would have to agree to play eight versus eight. This caused the players to have to cover more area and have no substitutions. Although, the Pounders powered through it.

On Tuesday, September 24, the team played against Bradley Central at home. Central took a devastating loss against Bradley Central. The girls did not play a full game due to the girls being tired with no substitutions. The girls took another loss on Thursday, October 1, against East Hamilton, with the final score of 5-0. The Central Pounders did not end up on top, but they are continuing to work hard for their next games.

During the first half of the game against Bradley Central, the girls played well. In the second half, the girls began to become tired from giving the game their all. In order to keep the game going, Bradley Central had to allow some of their players to play for the Pounders. Due to the game not going as planned, the referees decided to let the players scrimmage the last half of the game. Still, this ended up in a defeat for the Lady Pounders..

“Tuesday [against] Bradley Central, we did not [do] well at all,” shared Coach John Brittingham.

The Pounders tried to hold up during the first half, but with missing teammates, the girls were not at the top of their game. Also, since Central had no substitutions, the girls became tired with no ability to rest.

“Tuesday afternoon was a pretty rough game against Bradley Central. Having two players, including our goalie, with a concussion and another player with a foot injury hurt our team. In the end, we were left with seven players. Having to play seven to seven in the first half was rough due to us not playing our best. The [referees] then decided to let us scrimmage the last half of the game,” shared Junior Janetth Colunga.

On Thursday, October 1, Central traveled to East Hamilton to continue their season. The girls played well considering their substitution situation. At half time, the game was scoreless. During the final half, East Hamilton came back, scoring five goals. The game ended with a score of 5-0, a devastating loss for the Lady Pounders.

“Thursday at East Hamilton, we played very well against a very skilled team. Even though we lost, the fight that the girls played with was obvious and they made it very difficult for a good team to score on us,” said Brittingham.

The Lady Pounders worked together and came back together as a team for Thursday’s game. They gave the game their all and played as best as they could. Although they lost, Central put up a tough battle. Still without substitutions, the girls grew tired towards the final half of the game.

“Thursday night was definitely a better game then Tuesday. We came back and played our best on the field [better than] we did on Tuesday. East Hamilton is a very skilled team, and we still managed to play with them and not give up although we were very tired,” stated Colugna.