Central’s Concert and Jazz Bands Perform for the Holidays 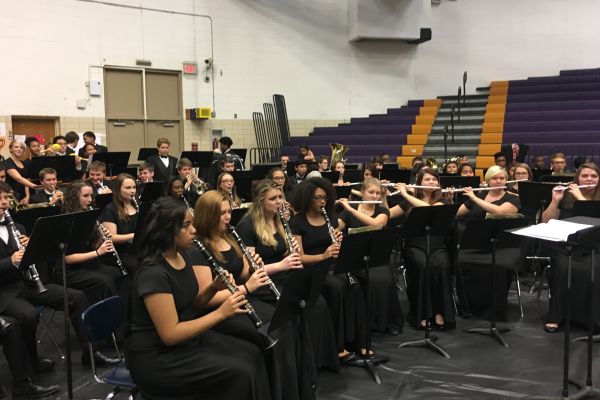 CENTRAL’S CONCERT AND JAZZ BANDS PREFORM FOR THE HOLIDAYS – Central’s Concert Band member play a variety of holiday songs for their Winter Concert.

As Christmas quickly approaches, Central’s Concert and Jazz Bands have been immersed in practice for their Christmas Concert.

The Central Jazz Band’s concert took place on Saturday, December 10, at the Hamilton Place Mall Stage, from seven o’clock p.m. to eight o’clock p.m. The Jazz Band performed holiday tunes such as Big Band Holiday, Good King Wenceslas, Holiday Joy, Away in a Manger, Baby It’s Cold Outside, Have Yourself a Merry Little Christmas, and Comfort and Joy.

“I think the students were the most excited for the Jazz Concert at Hamilton Place, because it’s a brand new event and location for us. I think it feels more like a real “gig” than just a normal concert,” commented Mr. Joshua Bloodworth, the Central Band Director.

Many members of both bands have stated that, although concerts are fun, it can be very stressful.

“Concerts are very fun! You get the opportunity to show our family and friends what we have been working on during class,” explained Joshua Sizemore, a Central junior, who has been a band member for five years and had three solos in the Jazz Concert and two in the Concert Band’s Concert.

“As fun as concerts can be, they are more stressful than they are fun. Having solos are stressful, as you are in the center of all the attention and are the only one playing. I cope with my stress and anxiety by getting myself to take deep breaths as I am playing.” concluded Sizemore.

The concert band performed on Tuesday, December 13, in the Central High School Gymnasium, from seven o’clock to eight o’clock.

The concert band performed the songs such as Overture to Miracle on 34th Street, Irving Berlin’s Christmas, Somewhere in My Memory, Christmas Vacation, All I Want for Christmas is You, and Secret Agent Santa.

“I was very nervous, but I usually just make myself take deep breaths. Meditation helps quite a bit as well…talking to my mom helps a lot too actually,” confessed Meghan Johnson, a Senior Central Concert band member that has been in band for six years.

Both bands had an extraordinary performance that was well executed, pleasing both old and young with nostalgic pieces.

The actual performances that took place aside, the factors of stress and anxiety in concerts are apparent and it is obvious that there is more than one concert that take place in one school year.

“The overall process that I use in teaching and rehearsing the bands is what I call ‘macro-micro-macro.’ We start by sight reading through the pieces in large chunks or in their entirety. We slowly work our way down to the individual measures of notes and rhythms that needs the most attention, and then we work our way back out to macro by putting all of the smaller pieces back together again,” explains Bloodworth. “By using this process, the students will have worked through all of the individual parts in detail but will have also had several chances to play the pieces through before it’s time to perform them. There will always be anxiety in live performance, and there will always be mistakes. However, by preparing thoroughly, those anxieties and mistakes tend to be lessened substantially.”

Now that the Christmas Concert is over, Bloodworth has revealed that both bands will continue to rehearse and perform for the concerts in the Spring.

“The Concert Band will again perform at the ETSBOA Concert Festival for adjudication along with a Spring Concert. The Jazz Band will likely give two more concerts next semester as well,” stated Bloodworth. “I will continue to look for outside events and venues for the Jazz Band.” concluded Bloodworth.