Every year, Central faculty and students nominate a maximum of six seniors, both boys and girls, to represent their graduating class on the Mr. and Ms. Central Court. To be eligible for the court, seniors must have attended Central for a full four years, have a minimal disciplinary record, and must list five extracurricular activities. Voting for Mr. and Ms. Central will take place later in the school year, and the winners will be announced during Senior Day. 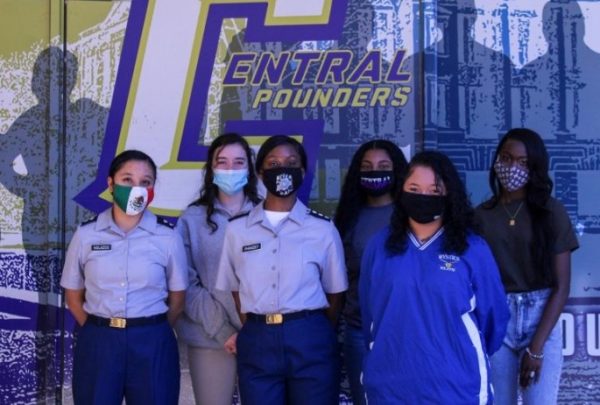 Despite the ongoing changes that have been occurring this year, Central is still keeping the traditions going. One of the Central’s main traditions is the annual selection of senior girls for the Miss Central Court. These nominees are based on academics, community service, extracurriculars, and disciplinary records. The class of 2021 has elected six senior girls to represent the school. Final court announcements took place on February 18. Any of the chosen girls will make Central shine with not only their beauty but their hearts as well.

The seniors that were chosen to represent their class are Ashlee Smith, Madison Taylor, Dallana Nolasco, Africa Phinezy, Destiny Smith and Ashley Lackey.

Ashlee Smith has been an active member in many of the extracurriculars that Central has to offer. She has been a part of the volleyball team, the drama club, the National Honor Society (NHS), digital arts, and the Fellowship of Christian Athletes (FCA). While involved in NHS, she became the president of the association affiliated with our school specifically. Since there is such a strong desire in this individual’s heart to help people, she plans to attend Bryan College and study health science with hopes of becoming a psychiatric nurse.

“I chose to be on the court because I really want to be a representative of Central. I am most looking forward to getting to wear a nice dress and just see everyone around me,” said Ashlee Smith.

Madison Taylor has not only been active in Central’s extracurriculars but activities within the community. She participated in cheerleading at the school for two years and joined the National Honor Society. Taylor has also been involved in OnPoint and an altruistic volunteer for the United Way of Greater Chattanooga. Despite running against many other students, she became the Power 94 Teen Reporter that was sent on behalf of Central. At the time of writing, Taylor has made no college decision, but she has three colleges in mind. She will choose between Clark Atlanta University, Alabama A&M, and Jackson State University soon. At the school that is chosen, Taylor will major in Biology with hopes of becoming a dermatologist.

“I am most looking forward to the future. Knowing that graduating is only the beginning of all our journeys is something to look forward to. Not only are we progressing but we are figuring out what makes us, us. I am also looking forward to moving away from Chattanooga because I think in order to grow and you shouldn’t be comfortable in your position or environment,” said Madison Taylor.

Dallana Nolasco has been a member of JROTC at Central since her freshman year. She has moved up within the company and achieved the rank of Battalion Commander, the highest rank a student can earn, in her senior year. Nolasco has also received many awards on behalf of JROTC. These awards include Ancient and accepted Scottish Rite of Freemasonry Southern Jurisdiction, National Sojourners Award, Association of the United States Army Award, and American Legion Post 14th Scholastic Excellence Award. She has received academic awards for all four years high school. She has participated in multiple career days and blood drives. While she is currently classified as undecided, Nolasco plans to attend Chattanooga State for an associate’s degree in dental hygiene.

“I decided to be on the court because I thought it would be an interesting experience every high schooler should take if given the chance. Senior year of high school is stressful as it is, with COVID-19 still going on, these small amazing opportunities should be taken advantage of in order create special memories at Central. I am most looking forward to a somewhat normal school experience and sharing an unforgettable experience with everyone else on the court. I also look forward to graduating among my friends and peers,” said Dallana Nolasco.

Africa Phinezy started her high school career as a member of JROTC and has stayed a part of the program up until now. She became a member of National Honor Society during the pandemic. Phinezy received many awards, including academic awards that base on the current benchmark tests. While a college is not yet known, she plans to pursue a bachelor’s degree in Forensic Biology and a master’s degree in Environmental Law. Her main goal is to protect the ecosystem at all costs while showing everyone the true beauty of nature.

“Before I leave high school I want to be able to look back on some fun memories I’ve made. I want to be able to share with my kids and grandkids about the time that I was on the Ms. Central court. There’s not much we as seniors can do this year due to COVID-19, so I want to do as much as I can.  I’m looking forward to graduation; it’ll be a huge relief knowing that I finally completed high school and accomplished all the hard work. It’s a huge milestone and I’m thrilled to start new beginnings,” said Africa Phinezy.

Destiny Smith came into Central with a very determined attitude to change any problems that conflict teenagers. She has been the class President all four years and has made an impact on all of her peers. Smith has been a cheerleader and a strong band counterpart. She has become a part of Beta Club, National Honor Society, and Younglife. These programs have paved way for her true leadership skills to show. Smith has received multiple awards relating to her academics. At the time of writing, Destiny Smith plans on attending the University of Tennessee at Chattanooga. She plans on studying either Psychology or Business. Currently, she is battling between her desire to start her own makeup company and the desire to help other people.

“I chose to be on the court because I have been a proud and helping student of Central High School for the past four years. I have participated in clubs, sporting events, and even class office. I have always listened to the student body to try help them improve their experience at Central. I’ve also worked with the staff to see what I could do within the school. Right now, I am looking forward to graduation and starting a new chapter in my life. I’m going to miss the high school experience I’ve gotten at Central but I’m excited for the future plans I have,” said Destiny Smith.

Ashley Lackey has based her high school career on growing as a person and getting her life on track. Lackey started her Central journey by joining the volleyball team, but due to a busy schedule, she could not continue to play after her first year. One of her favorite things that she has contributed to is the OnPoint club that Central has established. It has been a major part of her time at Central, and she believes it has helped make her who she is today. Ashley Lackey plans on attending the University of Tennessee at Chattanooga to major in Nursing while minoring in Spanish and American Sign Language.

“I didn’t participate much during my high school years, and this is my last year to be a part of activities such as Homecoming Court and the Miss Central Court. Mrs. Cochran has been encouraging me to be on this court since I was a freshman,” said Ashley Lackey.

All six females that have been chosen to represent the class of 2021 are worthy of the title of Miss Central. The winner of the competition will be announced on Senior Day, which is currently planned to be May 14. Brielle Farrow will also be speaking this day as the Class Dedicatory. May 14 will be a very special day for not only this group of people but the whole senior class. Let the traditions rage on. 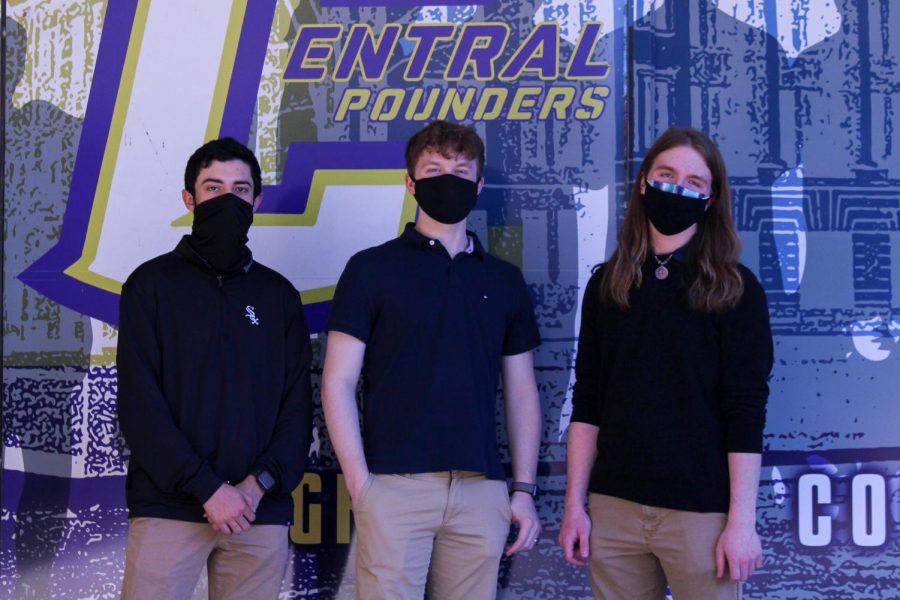 In order to be nominated for Mr. or Miss Central, students must be seniors with at least five extracurricular activities during their four years at Central. Blake Catlett was eligible after participating in the Central Digest and gifted program for four years, National Honor Society, and Model UN for one year. Grayson Catlett was nominated after having National Honors Society and Beta Club, the Central Digest and Model UN for one year, and attending the SCOPE conference under his belt. Finally, nominee Tanner Salinas entered the court with fours years of playing on the baseball team, participating in Central’s blood drives, and taking part in the JROTC Armed Forces Day Parade.

“I was startled when there were only three boys announced for the court. There are plenty of eligible senior guys out there. It just perplexes me. However, I don’t think it will greatly impact things. It’s just so weird that there’s only half of what it normally is,” expressed nominee Blake Catlett.

This year, Mr. and Miss Central will be announced on Senior Day, May 14. The announcement will take place in the gym, as usual. Luckily, during Phase Three, Hamilton County is allowing schools to gather 200 people in the gym.

“I’m not sure how they plan on doing it differently due to COVID[-19], but I trust in the faculty to make everything work out for the best as much as they can in these trying times,” explained nominee Tanner Salinas.

With the Miss Central court being full with six nominees, both the male nominees as well as Central faculty are still planning and tweaking the final arrangement for Senior Day. Despite the minimal amount of male nominees this year, the Mr. Central court students are honored and excited for this memorable opportunity.

“I’m honored to be able to be on the court! I’ve had a great four years here at Central, and it’s exciting to see them being repaid in the form of this nomination,” exclaimed nominee Grayson Catlett.

Despite the uncertain year and lack of male nominees, it seems that Central is determined to continue the exciting tradition of the Mr. and Miss Central court as normally as possible. Nevertheless, no matter how many there are, the Mr. Central court nominees hope to make everyone proud by successfully representing the senior class of 2021.