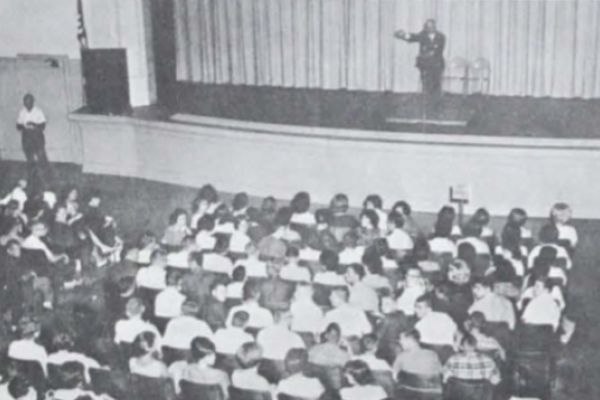 REGISTRATION DAY 1963 -- This was the scene at Central as Principal Hobart Millsaps welcomed students, new and old. (Preservation of Chattanooga Central History)

The following article contains summaries from the 2018-2019 school year of articles from past issues of The Central Digest.

Looking Back: Dropping Out Became a Huge Problem During the 1963-1964 School Year

Central had a great start to its fifty-seventh year, with an initial enrollment number of 1,739 students. This set a five year  record since the school population had gained 125 students. The increase was the largest since the 1957-1958 school year, when 2,018 students attended.

The Bellamy Flag award was presented to Central on October 11, 1963. The flag had flown over Washington D.C. on May 18 of that year, in honor of Francis Bellamy’s birthday. The flag was displayed in a new trophy case that was purchased by the Parent-Teacher-Student-Association. The flag was flown for a couple for days and during special events, such as homecoming, until it was retired.

The senior drama students were set to present a program titled “Fresh Air” on the night of November 22. “Fresh Air” was set to take place on a corner of Los Angeles where the mayor was conducting a speech in a park. The production followed the mayor’s plight during his kidnapping. The cast performed a dress rehearsal the Wednesday before the show, and a skit for the entire school the day before the show.

The President of Chattanooga Savings and Loans, Mr. W. Arnold Chambers, visited Central in December of 1963. Chambers strongly encouraged each student to finish high school and make their best effort to continue their studies in college. He also addressed the increase of juvenile delinquency at the time. Chambers denounced modern society, claiming that it insinuated that students grow up faster than they should.

Students dropping out was not only a problem for Central, but a problem for the entire nation during that time period. Statistics showed that 30 percent of high school students in the United States did not make it to graduation. For Central, approximately 41 students had dropped out during the first semester of the 1963-1964 school year. This number was huge in comparison to the total of 50 students that had dropped out the year before. The main reasons for the spike in dropouts included teenage marriages, joining the armed forces, and leaving to focus on work for jobs.

Looking Back: The Digest Takes On a Challenge Against City High 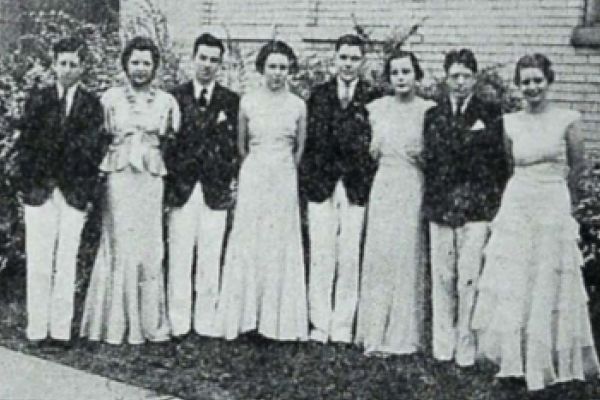 Sixteen of the 21 Central students who applied for the East Tennessee Orchestra were selected to participate after a two year cessation due to financial struggle; the East Tennessee Orchestra was able to resume the year. The Orchestra was led by Professor Norvall from the Church of Columbia University. They performed “Titus Overture” by Mozart, “Symphony No. 1” by Beethoven, “Marche Militaire” by Saint-Saens, “Andante Contabile” by Tschaikawasky, and “Blue Danube” by Strauss.

Seniors Present “The Lilies of the Field” Tomorrow Evening

On December 7, 1934 the seniors of Central High performed “The Lilies of the Field.” The play focused on the twin daughters of the Vicar of Wideleete: Catherine and Elizabeth. The play focuses on the twins trying to earn the favor of Barnaby Hadden and earn a trip to London from their grandmother. Elizabeth wins the competition and thrives in London, while Catherine later arrives in London and soon falls in love with an Englishman.

T.W. Parker was selected to represent Central in the State Gorgas Memorial Institute Essay Contest, where he was able to participate in the National Contest. Parker’s essay on “Gorgas Control of Transmissible and Other Preventable Diseases,” was chosen as the best out of 298 students who submitted essays. Parker was an associate editor to the Central Digest, a member of the Senate, as well as the National Honor’s Society.

Estelle Godsey and William Lowery were selected by the student body as Mr. and Miss Central for the class of ’35. They were presented those titles on Senior Day alongside their fellow nominees. This was the third year where students selected Mr. and Miss Central. After the presentation, there was a Senior Class Luncheon held in the cafeteria.

Looking Back: The Christmas Spirit of Central High 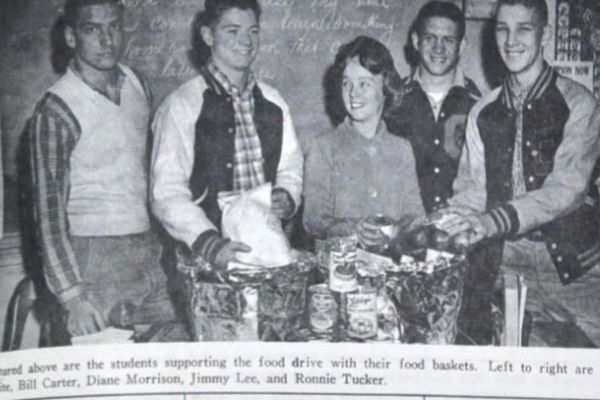 EDITOR’S NOTE: The following article contains summaries of articles from past issues of The Central Digest. On occasion, the Digest will look back into our archives to see what was happening around Central High in the past.

The tradition of creating Christmas baskets was long celebrated at Central. The Christmas baskets allowed students to give aid to anyone in need during the Christmas season. The baskets gave way to a great opportunity to help those burdened by poverty and hardships, while the rest of the world was celebrating and feasting. A competition arose between the homerooms to see who could conjure up the best basket. Competing not only brings fun into giving, but encourages students to go the extra mile to help those in need.

Enjoy the Spirit of Giving

On this Christmas season, Central students were only given a one week break to celebrate the holiday, but they were sure to make the most of it. However, they should not forget what this season is actually about: giving. Think of the ones less fortunate than you, ones who cannot afford the basic necessities of living. The many organizations that we give to during the season have a great purpose. They ensure that everyone, regardless of economic struggles, can enjoy the Christmas season.

Christmas is celebrated worldwide, but not in the same way as here in the United States. In France, families set up a nativity scene in the living room. On Christmas Day, they gather together to eat, burn incense, and sing. In Ireland, candles are set up in every window and doors are left open throughout the house. This is to showcase the hospitality of the season. Worldwide differences in Christmas customs emphasize the true spirit of the season.

Christmas Food Baskets To Be Filled by Homeroom

The Christmas baskets were quickly filled by Central students this year. Basket collection started on December 4 and continued until December 19. The student council delivered the baskets on December 19 to poor and needy families in the Chattanooga area, with an emphasis on Central students. Any remaining baskets were donated to the Salvation Army. Each basket was uniquely decorated by each homeroom. Central was able to show the holiday spirit in a special and unique way.

Many children have gone through the season with no presents, no joy, and no Christmas. They could not afford the festivities of the season. Luckily, the Forgotten Child Fund made sure that these children could finally have a Christmas of their own. The organization was started in 1963 by policemen who wanted all children to have something new to enjoy on Christmas Day. They believed Christmas was for all children, not just those fortunate enough to celebrate it.

The opening of the Harrison Bay Vocational School caused several problems for Central during its 1976-1977 school year. The new vocational school forced Central to change its previous starting time of 9:00 to 7:25. Many students complained about the drive to school, for they got caught up in the daily working commute. The school also limited Central’s vocational classes on campus. The decline in vocational courses also caused an increase in overcrowded study halls.

As Child Abuse Increases, Many Children are Killed and Injured Yearly

Chattanooga citizens were shocked after a four-year-old child in Cleveland passed away as a result of abuse. The tragedy opened the eyes of everyone in the area, as they realized how serious the problem was. At the time, the city of Chattanooga was notified of roughly 10-15 child abuse cases per week. In 1976, child abuse was only a misdemeanor, while many people considered upping it’s classification to a felony. There are many clues to note in child abuse victims including, but not limited to, undernourishment, repetitive scars, and an overall fearful attitude.

Ten Percent of Teenagers in Area Suffer From Some Mental Illness

National statistics reported that one out of every ten teens is dealing with some type of mental illness. The report presented the increasing rate of mental illness in teenagers. Research indicated that over eight percent of adolescents in the Chattanooga area deal with a mental disorder. The most common disorders recorded were depression and schizophrenia. None of the mental disorders had led to suicides in the area over the past year, but the threat of it was still looming over everyone.

With Spring Season Comes an Invasion of Insects

Since the beginning of spring, many Central students and faculty had reported problems with all sorts of bugs on campus. Mosquitoes, spiders, termites, and several nests were spotted around Central’s campus. Administrators called to see what could be done, and were put on a list of over 300 businesses and institutions with similar problems. There was little explanation for the sudden increase in insect activity in the area.