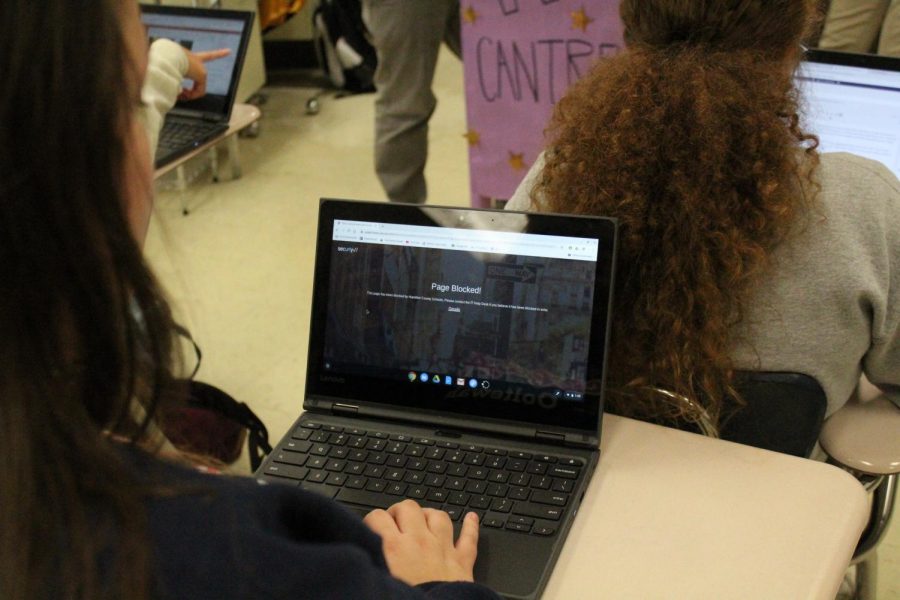 DO SCHOOL CHROMEBOOKS BLOCK MORE THAT NECESSARY? — A school issued Chromebook blocks a student from accessing a certain website.

This year at Central, students had the opportunity to receive a school-owned Chromebook computer of their own to use for the school year. While the Chromebooks can access several useful websites, some students have found that they have issues with some of the websites that are not able to be accessed. While school-inappropriate websites are rightfully blocked, some students have come to realize that other resourceful websites, such as certain photo resizers and popular education sites, are blocked for no real reason. These websites are not only blocked on the school’s internet access, but they are also blocked on the Chromebooks at all times.

“I think that the Chromebooks block more than they need to,” said Junior Julie Lopez. “I can not even play Cool Math games, which is something I would think that would not be blocked.”

“I do not think the Chromebooks should block things like Fortnite, because Fortnite is a good way for me to pass my time [at home], and I do not think anything is inherently wrong with it,” continued Lopez.

Some students, including Junior Madison Taylor, take an opposite position on the subject. The school needs a way to monitor the student’s activity on school computers and to maintain a healthy and appropriate environment for students.

“I think that some websites actually do need to be blocked because some people would use the Chromebooks for bad things. I have a computer at home that I can use for whatever I can not do on the Chromebook,” shared Taylor.

“Besides, school is a place for schoolwork. If something is blocked then you do not need to be there on that website,” continued Taylor.

Junior Kassidy Wade mentions how the risk of blocking good websites is worth the risk to make sure all of the unneeded websites are inaccessible.

“As long as the school does not block the things we need for school, such as Kahoot, Google Classroom, and things like that, I think that it is alright if a few okay websites accidentally get blocked in the process,” concluded Wade.